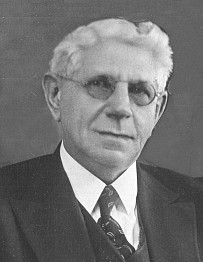 Born in Emmen, Drenthe, the Netherlands, Louis Berkhof emigrated with his family to Grand Rapids, Michigan in 1882. He graduated from Calvin Theological Seminary in 1900 and accepted the call to be the pastor of the Allendale, Michigan First Christian Reformed Church. In 1902 he went to Princeton University for two years earning a B.D. degree. He then accepted the pastorship of the Oakdale Park Church in Grand Rapids.

In 1906 he was appointed to the faculty of Calvin Theological Seminary. He assumed the presidency of the seminary in 1931, the year after the Hekman Seminary Building was dedicated on the Franklin Street campus, and served until retirement in 1944. Taking office during the troubled social and economic times of the Great Depression, Berkhof stressed the importance of maintaining orthodoxy in seminaries. Annual graduations from the seminary increased from 14 to 17 during his tenure. This modest increase occurred despite the fact that some felt the denomination's pulpits were over-supplied during the 1930s. Throughout he quietly sought to guide the denomination as well as the seminary through controversies that arose. A talented teacher and hard-working author, among his twenty-two books is Systematic Theology, which has been translated into several languages.